South Dublin County Council has voted to approve the ambitious Cycle South Dublin programme of work at the Council’s monthly meeting on Monday, 12 April. The approved programme seeks to progress works on 260km of new and improved cycle lanes across the County.

South Dublin County Council’s mission is for cycling to become a credible alternative to a private vehicle. However, to do this we believe we must deliver a well-designed, safe and well-connected walking and cycling network for people of all ages and abilities. Our objectives are to;

To this end, South Dublin County Council has prepared an ambitious programme of work, called Cycle South Dublin. This programme reflects the increasing importance of making cycling a realistic and integral part of how people move around the County. There is currently 207km of cycle lanes across South Dublin County. In recent years, the Council has progressed eight active travel projects totalling approximately 21km of new and improved cycle lanes. 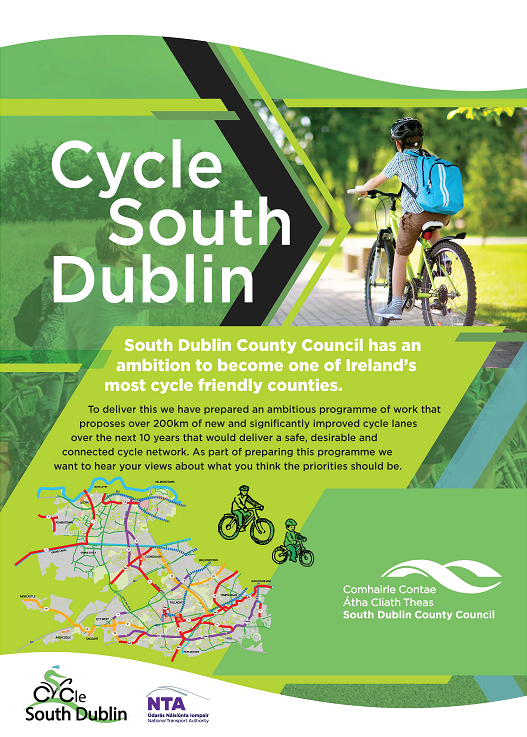 The Council approved ‘Cycle South Dublin’ programme includes 63 projects that would deliver approximately 260km of space for cycling and walking. This is an increase of nearly 50km from the programme that was publicly consulted on in late 2020. The projects are broken into four Council led phases and include; improvements to the Existing network; and then new schemes to be progressed in the following timescales NOW (within 2 years), SOON (within 5 years) and LATER (within 8 eight years). There would also be a fifth and separate phase of works to be delivered by the NTA via Bus Connects.

SDCC has been working closely with the National Transport Authority (NTA) and the Department of Transport and the NTA has advised that they are prepared to fund the majority of projects included over the next five years This has been demonstrated in their commitment to increase the Council’s active travel fund from €8.9m in 2020 to €20.7m for 2021.

“The Council has agreed an ambitious new programme of works with the vision of making South Dublin County one of Ireland’s most cycle-friendly counties. Traffic congestion in South Dublin has grown by 11% on our main roads since 2016. This results not only in lost time but also has negative environmental, economic and health impacts. Private vehicles will always have an important role to play in how people move around our County, but we quickly need to offer people high-quality public transport alternatives and cycling and walking are critical to this. This programme will see some 260km of new and improved cycle lanes progressed over the coming years for people of all ages and abilities. I am particularly happy that this scheme will provide safe routes to a large number of schools in the County affording our school goers the opportunity to cycle to and from school and form the habit of cycling as they grow up.”

Speaking on the approval of Cycle South Dublin, Mick Mulhern, Director of Land Use, Planning and Transportation at South Dublin County Council said, “

“We are delighted that the Council has agreed the Cycle South Dublin programme. As part of the public consultation, it was clear there is significant local support for this scale of work across the County. The Councillors have now given us a clear steer that they want us to progress with our mission of providing people with a well-connected, and safe cycle network that offers people a credible alternative to using the car. We will now be turning our attention to progressing the design and delivery of these projects.”

South Dublin County Council (SDCC) is already making progress on delivering the programme.  We are currently progressing works on the following active travel schemes. The following schemes are already on-site, or are due to commence on site shortly, but had been paused due to COVID restrictions.

In addition to those schemes that are on-site, SDCC is also making progress on several new schemes across the County, which are each at varying stages in the process for example feasibility, pre-planning, public consultation, or detailed design:

There are also sections of the existing road network where quick safety improvements can be delivered to make it safer for people to walk and cycle. These works are generally delivered through the quick installation of extruded curbs, bollards, lines and signs. SDCC has already completed schemes on Wellington Lane, and Fortunestown Drive and are progressing designs for schemes on Templeville Road, Castletymon and Limekiln and Whitehall Road West.

In recognition of the importance of building support and buy-in, the proposed programme was presented to the full Council in November 2020. This was then followed by a public consultation exercise that ran from 17 November to 18 December 2020.

There was some 1,556 different comments and suggestions raised within the submissions. These comments were spread across 10 categories addressing issues such as; how can the Council design a network that is safe and segregated so that it will enable people of all ages to cycle; how can SDCC strike a balance between the needs of all road users; how will SDCC fund the works and ensure timely delivery of the programme. Alongside these broad comments, the Council also received multiple suggested amendments and additions to the routes proposed.

South Dublin County Council has been hugely encouraged by the scale of responses and the general level of support for what they are proposing to deliver.