A transboundary EIA notification was received from the Planning Inspectorate UK in July 2018, regarding the proposed development consent application by Horizon Nuclear Power for the proposed Wylfa Newydd Nuclear Power Station, in Anglesey, North Wales, United Kingdom. For information, I have attached the letter that issued from the Department to local authorities concerning this matter.

Subsequently, local authorities, in conjunction with the Department, facilitated a national public consultation on the proposed development during the period between November 2018 and February 2019, with the consultation formally closing for receipt of submissions on 15 February 2019

On 27 January 2021, the Planning Inspectorate informed the Department of Housing, Local Government and Heritage that the application made by Horizon Nuclear Power for the proposed Wylfa Newydd Nuclear Power Station has been withdrawn. 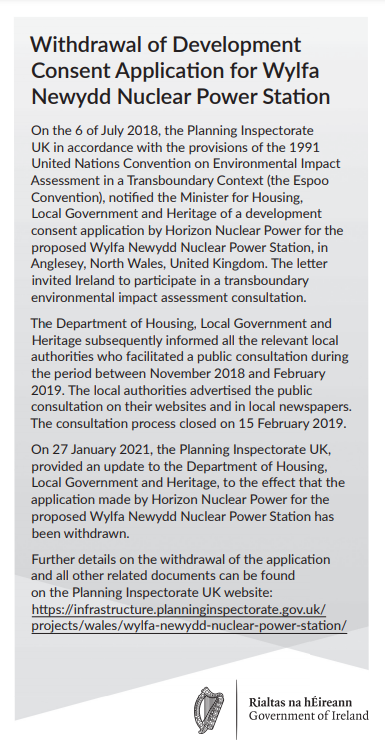